The number of movies directed by women in 2020 has dramatically increased, and it was a real pleasure for me to watch them all and speak with the directors and actors involved, even though, because of the coronavirus pandemic, this took place online and on smaller screens.

Emma, directed by Autumn de Wilde, with a screenplay by Eleanor Catton from the 1816 novel by Jane Austen, was released on February 21, when movie theaters were still open in Los Angeles. The director said: “Jane Austen was a brilliant satirist of small town life in the early 1800s, which is sometimes overlooked due to her delicious talent for weaving unparalleled stories of love and longing. These characters are so human, so iconic, so familiar that the distance we feel in years quickly evaporates as we are reminded of our own flaws. We still remain fools in the fight for love and friendship.”

I was impressed by the ironic tone and the exuberant visual palette of the film, and most of all by its star, Anya Taylor-Joy, and when I saw this amazing actress again in The Queen’s Gambit, I asked for a one-on-one interview for the Golden Globes website, and also wrote a profile for Cultural Weekly.

Anya also played Irene, Marie Curie’s scientist daugther in Radioactive directed by Marjane Satrapi. The director said: “You always think that the situation of women gets better, which is not true. Marie Curie (Rosamund Pike) had much less difficulties than her daughter Irene (Anya Taylor-Joy) making science. Why? Because between 1900 and 1910 you had this window of 10 years with lots of freedom, it was actually a moment of liberation for women. Then the first World War happened, and they said to women, ‘Go back to your house and mix bread. This is what you’re supposed to do.’  We’re not always advancing. For example, you see that the number of clinics that may do abortion in America are closing one after the other.”

The first online screening I truly enjoyed after the lockdown was The High Note directed by Nisha Ganatra from a script by Flora Greeson. “The script centered on the relationship between two multifaceted women who were talented and uncompromising, yet also funny and flawed in all the best ways. Maggie (Dakota Johnson) who is trying to break into a field that doesn’t take women seriously, and Grace Davis (Tracee Ellis Ross), a music icon who is struggling to stay in a field that sidelines women when they get to the age of 40. In this strange new pandemic time, I hope this film helps bring a little joy to all of our lives and buoys our spirits with beautiful songs and laughter. It’s important to tell stories that emphasize how we all benefit from striving to be our best selves and from coming together to support one another.”

I’m Your Woman directed by Julia Hart starring Rachel Brosnahan subverts the crime thriller tropes. “There has never been a lack of women wanting to tell stories, it’s just been a lack of opportunities. And it’s thrilling this year in particular to see so many amazing films directed by such awesome women. So many of my favorite movies that made me fall in love with filmmaking, The Godfather, Thief, Straight Time, The Getaway, focus on the male perspective, so it was fun to still keep all of those great genre elements, but shift the camera over to the woman who’s often in the background. Becoming a mother made me feel the strongest I’d ever felt and I wanted to see what would happen if you put a mother at the center of a chaotic and dangerous world who’s not only having to protect herself but also a helpless child.”

I wrote a cover story on Rachel Brosnahan for the Italian magazine Voilà.

Promising Young Woman, written and directed by Emerald Fennell, starring Carey Mulligan, is a candy-colored dark comedy with a serious message. “You think you’re in a romantic comedy, that you’re taking this funny girl home because that’s part of our culture. It’s only when you’re confronted with it unexpectedly, that it suddenly feels transgressive and scary. I’m not interested in truly malevolent evil people, but in good people who do bad things and will not admit to them. For me this film is actually about forgiveness, but you cannot get forgiveness, even in a biblical sense, unless you ask for it and you admit fault.”

I was curious to attend a drive-in premiere, so I went to the Grove to see Happiest Season directed by Clea DuVall, who wrote the screenplay with Mary Holland. It’s a romantic comedy set at Xmas time when a young woman (Mackenzie Davis) brings her lover (Kristen Stewart) home to meet her family, but has trouble coming out as gay. “I hope that this and other LGBTQ+ movies give people the confidence they need, or make them feel strong enough to come out, and if they don’t do that, at least, while they’re still in that part of their journey, they can feel less alone and less afraid. I want them to know that there are people out there like them and that, whenever they’re ready, they can come out and be embraced by this community. It is so brave that people make that conscious choice to take that step in their lives.” 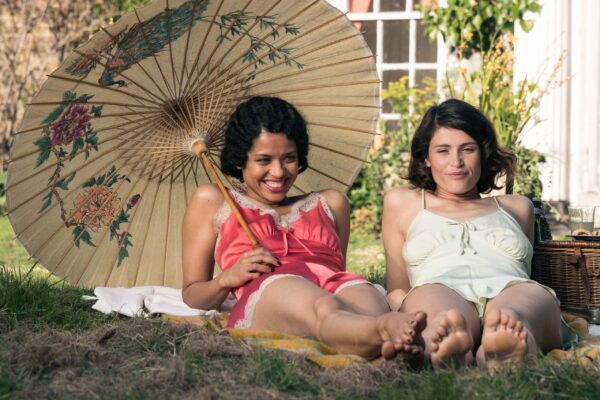 Summerland, written and directed by Jessica Swale, is a lesbian love story with Gemma Arterton and Gugu Mbatha-Raw set in the 1920s and remembered in flashback during World War II England. “Summerland is a pagan idea of what heaven is, the notion of a place that exists alongside ours. It represents the possibility of something beyond and magical.”

Mulan directed by Niki Caro was the last movie I saw at a press screening on March 5 in the luxurious iPic in Westwood, the March 27 theater release was postponed to July 24, then cancelled. The movie became available on the Disney+ streaming channel on September 4. The director said: “For me it was such a privilege to tell a story that’s been relevant for over a millennia, to commit to the real journey of a young woman that goes to war to save her father’s life, disguises herself as a man and then finds her own authentic power and fights as a woman. To be a female director that tells this story now is even more relevant because I connected to my own power as a woman to tell it.”

I had featured Niki Caro in my article about Women Directors of 2017 for The Zookeeper’s Wife.

I wrote articles about The Glorias directed by Julie Taymor, and Wonder Woman 1984 by Patty Jenkins. Click on titles to read.

There were so many movies directed by women in 2020, that I will write a second article about more titles, stay tuned.

Tags:
Previous Article
They Write by Night, “Trump in Hell” — in this episode’s poem and, elsewhere, in life
Next Article
Dance Camera West 2021